The ‘Fun Palace’ idea by Cedric Price was a method of attacking the established order of institutions becoming defined by their architecture.  He proposed a flexible building which would not last more than ten years in order for it not to stagnate into the type of institutionalised establishment which the architect loathed.

However, there are cases where a building that stands the test of time is a positive influence on moulding the institution housed within it.  A Glasgow example would be Charles Rennie Mackintosh’s School of Art building, now showing the bumps and scuffs of a century’s worth of exuberant students.  Another example would be the University of Strathclyde’s School of Architecture building, which although less celebrated, is just as influential on the scores of students it houses.

In 1888 at the Glasgow and West of Scotland Technical College (the predecessor to the University of Strathclyde) an architecture department was established which would soon become known as the Glasgow School of Architecture – one of the first schools in the country.  In 1964 the institution, growing with university status, commissioned a new building to house its Architecture School.

The Professor of architecture at the time, Frank Fielden, being awarded the commission, fulfilled the role of architect and client simultaneously.  Completed in 1967, it was the UK’s first purpose-built architecture school in over three decades.  It can certainly be regarded as the University’s finest post-war building on campus and, like the School of Art, was designed around its educational function. 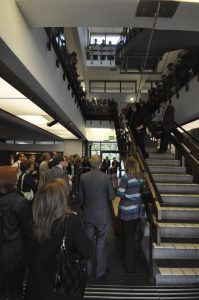 Site constraints comprising a steep slope from north to south at Rottenrow in the city, dictated a long narrow building on an east/west axis as the solution.  The resulting building has a distinctive rhythmic appearance due to its regulated recess and relief of 12 projecting bays along the facades on the upper two storeys, cantilevered over the main ground floor.  The rational fenestration pattern is repeated in large triangular rooflights facing north. Whilst sculpting the roofscape, these capsules also contribute a glowing lightshow come nightfall.

The functions of the building are arranged in a pragmatic fashion which is refined by the structural handling.   Inner columns close to the core delineate the passageways, whilst a five-metre cantilever to the north contains the studios, with a shorter four-metre span cantilevering to the south containing the academics’ and administrators’ offices.  Along with the rooflights and the asymmetrical balance of the cantilevers at the east and west elevations, the building looks poised, lively and well composed.

The architect’s desire for the school’s arrangement to be ship-like is most evident when considering the large open plan studios as a ‘promenade deck’.  This ‘deck’ is served by a central core containing seminar rooms, a computer laboratory, toilets, ducts and, on the top floor, the school’s dedicated library beneath two of the large rooflights.

Dense engineering brick, typical of British Brutalism at the time, infills the structural bays.  The rigour and restraint of the palette is evident – the only other materials expressed externally were concrete and the proprietary copper panels designed to reduce solar gains and provide some pin-up perimeter between the Crittall windows. A rare burst of explicit decoration came in the form of an abstract concrete sculptural mural in the main foyer by artist Charles Anderson.

Bespoke furniture was designed for the building which, matching the building structural module, gave each student a high-quality working environment with an element of luxury which could be modified in arrangement in order to take ownership of their individual spaces.

Alterations since completion have not enhanced the building’s appeal.  The original bespoke lighting has been superseded by the standard fluorescent tube fitting; a large quantity of the softwood lining has been removed; the staircase has been boxed in due to fire regulations, and new firedoors obstruct some visual axes; some clerestory windows on the ground floor beneath the promenade deck have had spandrel panels inserted; and the main doors have been replaced in the wrong position.  Perhaps the most visually significant change, though, is the painting of the concrete and much of the internal brickwork.

Despite these largely reversible changes, the building’s design intentions are still evident.  As the Architects’ Journal said at the time “the materials are a clear statement of the building’s form and purpose”.  The article highlighted the significance of the building in re-defining architectural education, with its open-plan studios as the focus of student activity, coupled with an emphasis on de-segregation of year-groups.  This same 1967 article states that it is impossible to predict educational models in twenty years time, but even with a considerable rise in student numbers the benefits of cross fertilising and inter-year peer learning are still being felt forty five years on – a large endorsement for the building.

As a student of the school since 2007, I greatly admire the building and have developed an affinity to it.  Individual identities as students, and the collective identity of the school, are nurtured and shaped by this building more than, perhaps, other departments of the university housed in nondescript buildings.

Form of Contract:  General Conditions of Contract for Building Works in Scotland

Ruairidh Campbell Moir is a student of architecture at Strathclyde University, Glasgow and is about to undertake his final year postgraduate thesis project.  He is also a council member of the Royal Incorporation of Architects in Scotland (RIAS), and member of the Western Isles Architects Group (WIAG).