The Scottish architect James Robb Scott, (1882 – 1965) designed a string of railways stations – from Bishopstone to Bromley North, Horsham to Hastings, Ramsgate to Richmond – but his Art Deco masterpiece was Surbiton Station, in the heart of London’s commuterland. He also designed Waterloo Railway Station and offices, and the Victory Arch war memorial. From humble beginnings in the Gorbals area of Glasgow, where poor sanitation, overcrowding and poverty were rife, Scott joined the London and Southern Railway in 1907 and became Chief Architect of the Southern Railway during their early evolution. One of Scott’s contemporaries at the time was Charles Holden, known for his modernist underground stations of the twenties and thirties such as Arnos Grove and Northfields. In the writer’s view, Scott was easily his equal, with the Grade II-listed Surbiton station being the jewel in his crown.

The first station at Surbiton was completed in 1867, but it was totally rebuilt in 1937. It is more than just a railway station as it consists of a compendium of individual buildings, both round and square, joined together. There are kiosks, a clock tower and many other outbuildings. The centrepiece is the spacious and electrifying booking hall, which particularly stands out when it is illuminated at night. From 1985 it also 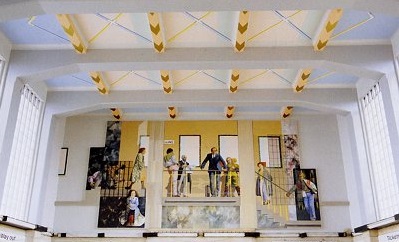 contained a striking mural, “Passengers” (left), painted 1984-85 by the Yorkshire-born muralist and portrait painter Graeme Wilson. The mural brought the station to life, even when the booking hall was empty. For some reason it has since been removed. The station has a simple, logical layout, with food, drink, newspapers, paperbacks and tickets presented to the passenger – nine million of them per annum – as if on a conveyer belt, before giving easy access to staircases and aisles, all beautifully lit.

The entire complex is built of reinforced concrete with a flat roof.  The central tall, single-storeyed booking hall is flanked by low narrow bays containing kiosks, curving backwards to meet long low wings. A continuous cantilevered canopy of concrete, with a mounded edge, wraps round both central block and wings. On the left is the clock tower with a strong, but narrow cornice and horizontal strings to its upper part. The booking hall has long, square-headed windows with narrow, closely-spaced mullions, below which are the original wood and bronze doors, with triple bronze bars in front of long narrow windows. On the canopy of the central fascia is the name – Surbiton – in handsome sans serif capitals. The booking hall is lined with marble lined. Two long single storey buildings remain on the platforms, built to contain offices, lavatories and waiting rooms. They are also of reinforced concrete, with rounded ends and horizontal glazing bars to windows.

The station has a moderately sized goods yard, with two additional sidings located on the “up” side of the station, served by a short loading platform. In addition, the main yard was also used as the loading point for the short lived Surbiton- Oakhampton car carrier service that ran between 1960 and 1964. The main goods yard finally closed in 1971 with all local freight operations being moved to the nearby goods yards at Tolworth. The former goods yard site ultimately became the main station car park at the back of the station (where you will also notice a lovely block of Deco flats).

The interior of the station is in a very reasonable state, considering nearly twenty million feet tread its boards each year, and the booking hall is well cared for, if not pristine. However, the exterior is badly in need of a good clean, especially the magnificent original doors at the back (and to a lesser degree at the front). Chipping is also apparent next to and above the name of the station, continuing all the way along to the Sainsbury’s outlet. It seems a shame that such a treasure is not better cared for – come on whoever you are, this isn’t rocket science! This station is unique and deserves to be preserved.

I will conclude on a lighter note by reminding readers that the station has been used for several films and TV programmes, including Harry Potter and the Half-Blood Prince in 2007, and Agatha Christie’s Poirot: “The Adventure of the Clapham Cook” in 1989. This ITV adaptation of Christie’s short story was set in the 1930’s, and had shots of Flavin Court standing in for Poirot’s fictional residence Whitehouse Mansions. As the station was built within a year of Flavin Court, it was particularly authentic. I would urge you to go along and see it for yourself.