“Construction of the International Automatic Telephone Exchange, nicknamed The Piano, was quite a big technological challenge in the 1970s,” explained a sprightly, forthright Milan Mihelič, then 85, in a charming documentary about his life and work made for Slovenia’s public television, TVS, which was broadcast in 2010. “The biggest problem was the curved toughened glass. The Swiss company working with us claimed that they were not technologically equipped to curve it. So the director of the Post Office and I jumped into a car, drove to Switzerland, talked to them and then they promised that they would try and do it.”

The journey paid off: the IATE – Mednarodna avtomatska telefonska centrala in Slovenian – got its curved toughened glass façade and became the first high-tech building in Slovenia.

In 1970, the then Post, Telegraph and Telephone Company, the PTT, organised an anonymous design competition for the new telephone exchange and offices. The competition was won by Mihelič – he code-named his entry “Porta” – and the building, consisting of a basement (for the telephone exchange), ground floor and two storeys (for offices), was built in 1972-78. Stane Bernik, the author of two monographs on Mihelič and a curator of various exhibitions featuring his work, says that the building “unbelievably quickly became an architectural icon”, being widely published both nationally and internationally. 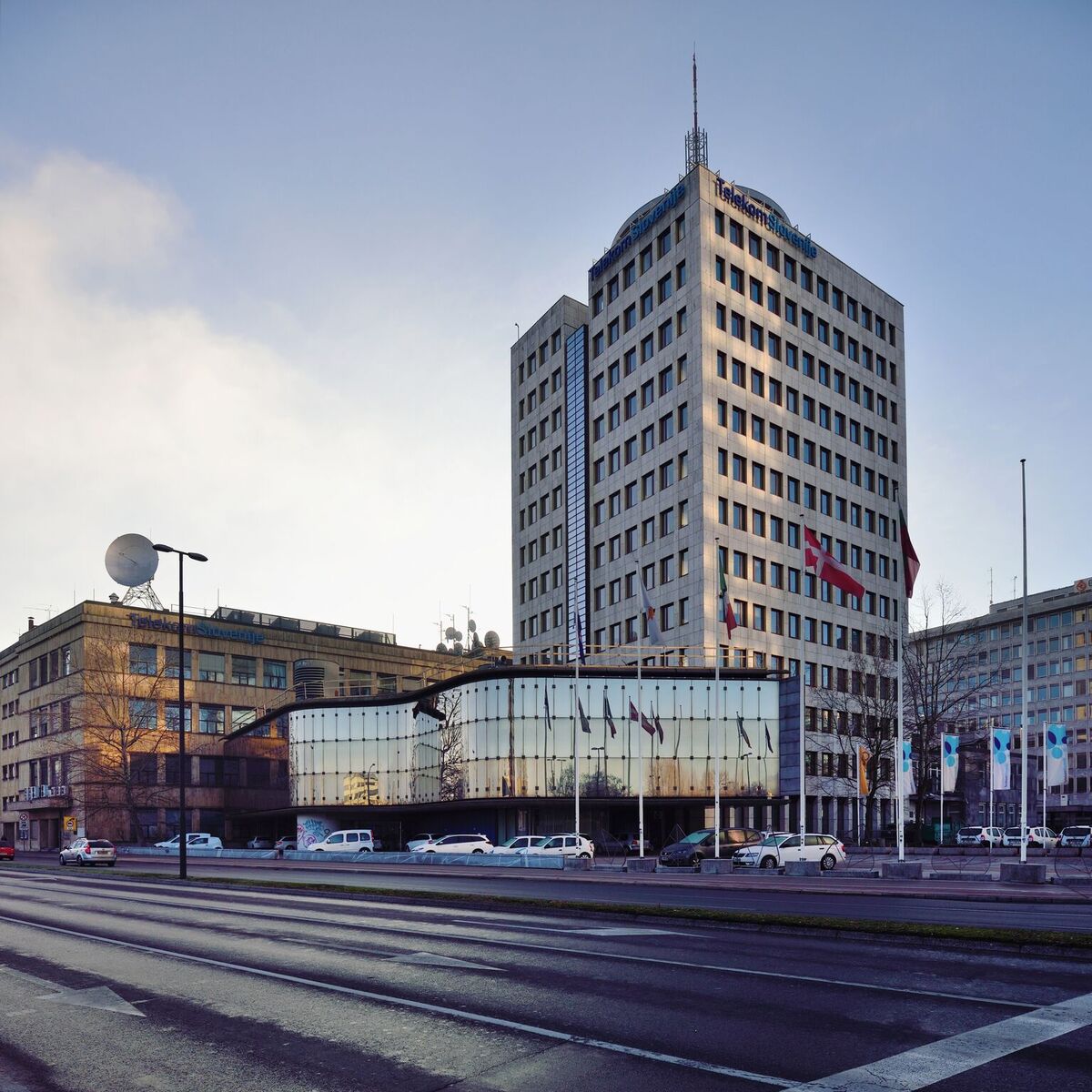 Concerning similarities with another building with a curved glass façade, the near contemporaneous Norman Foster’s Willis, Faber and Dumas Building in Ipswich (1970-75), Bernik believes it is “merely a coincidental design reflection” and that “both buildings can be matched only because of the period they were built in” (in Milan Mihelič, SAZU, Ljubljana 2011).

This “design reflection” notwithstanding, the IATE was also an important and interesting next step for the architect himself: Mihelič was one of the leading, most innovative and exciting Slovenian modernist architects. Born in 1925, he studied under Edvard Ravnikar at the University of Ljubljana’s Faculty of Architecture. His first job, in 1951-52, when he was still a student, was a studio he built himself for his brother, the artist France Mihelič; and one of his earliest major projects was five residential towers in Savsko naselje (Sava Estate) built in 1957-62, which he designed with Ilija Arnautović.

For his work he won two Prešeren Awards – the most prestigious Slovenian award for artistic achievement – and received both the Plečnik and Trend life achievement awards (in 2008 and 2015 respectively). He was elected a full member of the Slovenian Academy of Arts and Sciences in 1987. “Concrete is malleable. It’s the same as clay for a sculptor. And then we designed all sorts,” he said, matter-of-factly, in the documentary, discussing his work in the 1950s and 1960s – exquisite residential towers, office blocks, exhibition halls, department stores – all made of concrete. Not surprisingly, he was even called “one of the most important poets of concrete construction”.

Then, in the 1970s, glass obviously became malleable, too. Bernik says that the IATE “has grown out of the basement and the two tubular pillars made of exposed reinforced concrete”. The pillars are also used as a core. The two floors are covered with “toughened Calorex glass, defined in a high-tech manner, softly and playfully – in the shape of a piano – following contours of the overhang and the lower window ledge, which is made of reinforced aluminium”.

The building is just one of the elements in Mihelič’s scheme he called the “Northern City Gate” in Bavarski dvor, the area to the west of the junction of Slovenska cesta (Slovenian Road), Trg OF (Liberation Front Square), Dunajska cesta (Vienna Road) and Tivolska cesta (Tivoli Road), and one of the busiest crossroads in Ljubljana. The “Gate” in the name of the scheme was also the reason why his code name for the PTT competition was “Porta”.

Mihelič started planning his “Northern City Gate” in 1963, again for a competition; he kept returning to the project over the next 30 years. Only three buildings from this astonishingly ambitious and comprehensive plan were constructed: a petrol station (a Brutalist and panelling gem from 1967-68), an office tower S2 (designed from 1963, but only completed in 1980) and the IATE. “The Piano is, basically, a connecting element between [Oton] Gaspari’s [1953] PTT House, the Telekom tower and, across the road, towers S1 [never realised] and S2. It was a spatial composition and not a vanity building, though I am aware it was a very difficult project to get through. A lot of people suggested that it should be rectangular and that I should stop complicating things,” says Mihelič.

Various plans – and especially architectural models from 1972, 1989 and 1991 – reveal what a missed opportunity for Ljubljana Mihelič’s plan really was; and with some recent additions to Bavarski dvor – an undistinguished green glass office slab and a 20-storey hotel – and with another one planned, there is, sadly, no chance of it ever being realised. To Mihelič’s chagrin, the Ljubljana Town Hall keeps using the term the “Northern City Gate” for various schemes in this area, never bothering to credit the man who actually coined it.

However, Mihelič did manage to influence the development of Bavarski dvor. The 2003-2005 refurbishment of the Telekom tower behind the IATE is his final work. He clad a simple, undemanding 1950s Modernist tower by Tine Horvat with travertine and, as he explained, “vertically cut the façade to catch the rhythm” of his other buildings – both built and unbuilt – in the area. It’s a curious coda to the IATE, but nevertheless an excellent reminder that Mihelič is above all an ingenious architect, who despite some postmodernist stylings in his last completed work, was at his happiest when he returned to his modernist roots.

* * *
Milan Mihelič is, together with Edvard Ravnikar, the “More” in “Plečnik and More”, the focus of C20’s upcoming trip to Ljubljana.

T J Zupančič, a translator and former journalist, is responsible for C20’s Instagram account @c20society. His main interests are modernist architecture and social housing, both extensively covered in his Instagram @notreallyobsessive.

A special thank you to Denis Simčič, an architect and photographer, for providing the featured photographs. See his Instagram @denissimcic for more of his work.