Walkers on the Preston Bus Station Parade were led by a fine banner, a New Orleans jazz band and some really clever cardboard and plastic bus station segments, which you see in the photograph. There’s now talk of setting up a group of Friends to support and monitor work on the restored bus station. See a video and report in the Lancashire Evening Post. 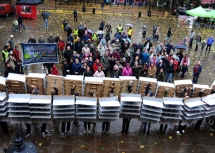 I also heard about [another] film about the station called 56,000 – a short film about Preston Bus Station. This is to be ‘premiered’ on November 28, after which it will be posted on YouTube at http://youtube.be/UPVSV02Pz7c . The film has a Facebook site, too, at facebook.com/56000PBS; Twitter is at @56_000.

Reflecting about this campaign, we have used not only conventional casework techniques but also celebrating the building in photography, art, drama, music, interventions and other cultural activities. Maybe there’s a lesson in this for other present and future campaigns? Social networking and blogs have been very useful too.